The EcoAir DD122 Mini Compact Desiccant Dehumidifier is the smallest dehumidifier that EcoAir make. This dehumidifier should not to be confused with the very popular DD122FW range, which is an older, larger design and a little more expensive than the DD122 Mini.

The DD122 Mini is a new desiccant dehumidifier for 2014 and from the specification promises to be the smallest and quietest dehumidifier on the market, so in this review we’re hoping that it’s every bit as good as it sounds.

For such as small (and reasonably priced) dehumidifier the DD122 Mini comes with a good range of features, all of which are selectable through the easy to navigate soft-touch buttons and individual LED menus of the control panel. 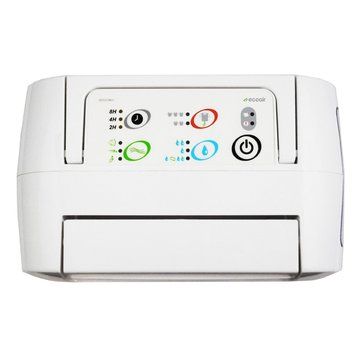 The in-built timer is settable for either two, four or eight hours, which is a very useful energy-saving feature, particularly when combined with the laundry settings (more on those later). Drying wet clothes with the laundry setting switched on should only take a couple of hours, so if you’re not around to switch the unit off once the laundry is dry then you can deploy the timer feature to avoid having the laundry mode running unnecessarily all day.

Let’s move swiftly on to the laundry settings. Both of these modes run the dehumidifier on ‘turbo’ mode, which runs the unit at the maximum dehumidifying power. This strips moisture out of the air faster than the other modes, which means a damp room or wet laundry dries much faster (e.g. a standard washer load should dry within two hours). The great thing about the laundry mode on the DD122 Mini in particular is that on both laundry modes when the humidity drops low, they will toggle on to energy saving mode (low power) to avoid over-drying the air, whereas the vast majority of other dehumidifiers would just keep powering away inefficiently. So what’s the difference between the two modes? The ‘laundry quick’ mode is signified by the three shirts symbol and the ‘laundry normal’ mode by two blue shirts. The only difference between these is the humidity level at which the two modes will toggle into energy saving mode, i.e. ‘laundry quick’ will toggle into energy saving mode at a much lower relative humidity (~10% relative humidity lower) than ‘laundry normal’. Both modes run at the same ‘turbo’ level when not in energy saving mode.

Moving clockwise around the control panel the next selectable functions are the dehumidifying settings. There are three options to choose from, either ‘Hi’, ‘Economy’ or ‘Auto’. ‘Hi’ mode runs the fans at normal speed and targets a relative humidity of 45%, which is towards the dryer end of the 40% to 60%RH range considered to be ideal. Once 45%RH is reached then the machine will run on fan-only mode until the humidity rises beyond this. ‘Economy’ mode changes two things from ‘Hi’. Firstly, on ‘economy’ mode the fans run at economy speed and secondly the targeted humidity is lifted to 55%RH, which of course requires less energy to reach. The third dehumidifying option is called ‘auto’ and this is a combination of both ‘hi’ and ‘economy’ modes in an effort to give you the best of both worlds – EcoAir’s so-called ‘E7 Technology’. ‘Auto’ mode targets 55%RH, the same as on ‘economy’, the difference is that it will use a combination of normal (as found on ‘hi’ mode) and economy fan speeds in an effort to offer faster dehumidifying power when you need it (e.g. someone’s just stepped out of hot shower) and economic performance when you don’t. EcoAir suggest that you use ‘auto’ mode for the vast majority of the time. However you may also want to consider ‘hi’ mode for a particularly damp room or for when it gets below 5°C outside. We’d agree with this set-up.

The bottom left button on the control panel manages the louvre, which will swing in either a ‘wide’, ‘front’ or ‘up’ pattern, depending on which you select. This is a feature all EcoAir desiccant dehumidifiers have and is one of their big competitive advantages as it offers improved air distribution over competitors, which almost universally only outflow air in one direction. You can disable the swing and set one particular angle by holding the button down when the louvre reaches your desired position. This is useful if you want to target one particular spot, like a patch of mould growth.

Also on the control panel is the on/ off button, a warning light should anything not be working properly (e.g. the air filter needs to be cleaned) and a ‘tank-full’ light. 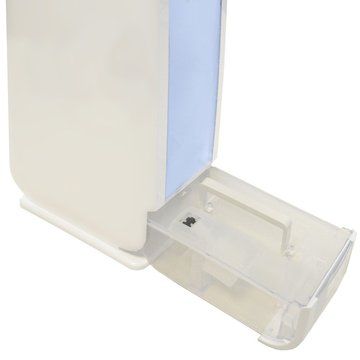 The tank full light could well be illuminating frequently as the DD122 Mini comes with a small 1.8L water collection bucket, rather than the 2 litre buckets typically seen on this power of machine. However given it’s smaller dimensions we can forgive this 200ml loss of capacity. The machine does stop dehumidifying automatically when the bucket is full to prevent overflows. The bucket is more of a tray, which slides out neatly from the side of the unit and features both a handle and a lid to make it easier to carry and minimise spillages during the trip to the sink. The front of the bucket is slightly translucent, which means that in the right light you are able to see the current water level without pulling out the tray.

If you’re able to position the dehumidifier near to a drain then you could utilise the continuous drain ability by unscrewing the hole in the back of the unit and affixing the 12mm hose that EcoAir supply in the box.

The anti-allergic deodorising air filter is a useful addition, but when it requires cleaning you must remember to vacuum clean it rather than run it under a tap as the water can destroy the special coating. EcoAir are very secretive about what actually makes up this coating and real-world tests are tricky to conduct, so it’s difficult to comment on the effectiveness of this. While on the air-purification theme, what is a shame is that EcoAir haven’t included an ioniser on the DD122 Mini and I suspect this has something to do with protecting the sales of their models that sit above this one. 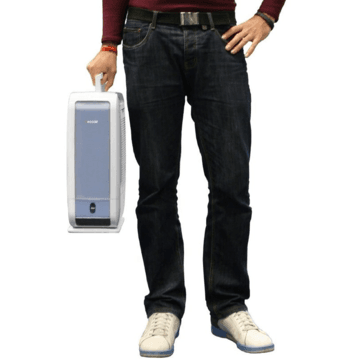 Mini by name, mini by nature, this dehumidifier is the smallest ‘proper’ dehumidifier on the market with diminutive dimensions of 17.4cm deep by 26.9cm wide by 44.5cm high, making it very easy to tuck away in the corner of a room.

Being a desiccant dehumidifier it’s also very light and is in fact the lightest on the market at just 5.1kg. This low weight coupled with the top-mounted handle and narrow dimensions make the unit a breeze to carry around.

The appearance of the DD122 Mini is no doubt a vast improvement over EcoAir’s older models, which previously was an area that really let it down. The funky curved corners, matte white plastic and blue bands down the sides of the unit give it a modern, clinical look.

It’s also a design that offers practicality, with an ergonomic top-mounted carry handle, well laid-out control panel and easily accessible water collection tray all contained in a unit of such small proportions that will shock you when you first get it out of the box.

The vast majority of people will leave the machine permanently switched on either ‘auto’ or ‘economy’ setting and the good news is that under these settings the dehumidifier is exceptionally quiet and in fact steals the crown on ‘quietest dehumidifier on the market’ from it’s bigger brother, producing just 32dB on it’s lowest fan speed versus 34dB. This means that you could easily site the machine in the room that you watch television in or in the bedroom. On the laundry modes or ‘hi’ the unit is much more audible, producing up to a maximum of 47dB, which sounds like a quieter bathroom extraction fan, but these modes should really only be for special occasions, so we aren’t as bothered by this.

The EcoAir DD122 Mini is rated to extract 6 litres of water per day at 20°C and 60%RH. This is towards the less powerful end of desiccant dehumidifiers, but would be perfect for homes up to and including 3 bedrooms (possibly 4 at a push). Having more power just allows you to reduce the initial humidity faster but doesn’t have very much added benefit once the dehumidifier has ‘bedded in’ to a home.

Of course a desiccant dehumidifier has the added benefit of continuing to extract moisture in good amounts at temperatures below 15°C, where refrigerant dehumidifiers struggle to extract water and become increasingly inefficient.

To summarise the above, the new EcoAir DD122 Mini is good-looking, feature-packed, relatively powerful yet shockingly small dehumidifier that other than the lack of an ioniser has no obvious draw-backs. It would be a great choice in my opinion, just make sure you don’t overpay. We found a great deal and free shipping on it at this store, so make sure you check that out.