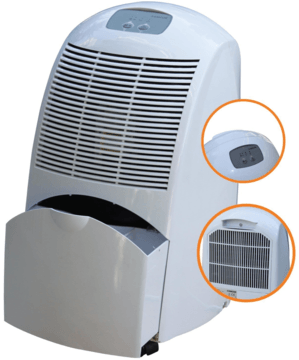 The Amcor 12L is definitely towards the budget end of the dehumidifier scale and so endless features aren’t to be expected and indeed, they aren’t present. 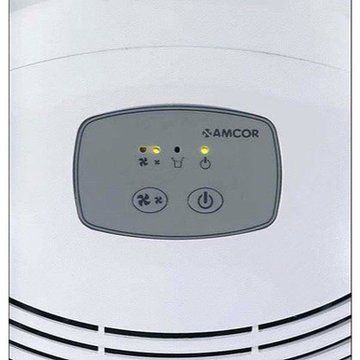 The control panel is the most basic we’ve ever seen, with simply an on/ off switch and a button to set one of the two fan speeds. This means that in terms of dehumidifying options it is either dehumidifying, or it isn’t. The humidity it will work towards is 40% relative humidity and when it reaches this point it will stop dehumidifying and just run the fans to keep the air turning over. 40%RH is the dry end of the ‘ideal’ scale, being perfect for when it’s colder outside although you could find it a little too dry when the temperatures are heading above 10°C. We would prefer at least some level of flexibility in this setting as one humidity clearly isn’t going to be right for all occasions.

It is good that the AD12 gives you two fan speeds, as it offers the benefit of power when you need it and quietness when you don’t. For drying clothes or drying out a particularly damp room the higher fan speed is ideal, but for general usage the lower fan speed will be enough.

Also on the control panel is a light that switches on when the water collection bucket is full. This model does stop dehumidifying when the tank is full, so there is no risk of any nasty overflows.

The water bucket is a measly 1.5 litres, against the standard for this power of machine being around 2L, so you will be needing to empty it roughly two times per day depending on the humidity in your home. The bucket is easy enough to take out and put back thanks to the lip on the top to grab on to. There isn’t a viewing window into the bucket, which is a shame as you either have to rely on the ‘tank-full’ light on the control panel or occasionally open the bucket to check the water level.

There is an auto-drain option, with a valve on the back of the machine you can attach the 10mm pipe to (please check diameter of pipe with your manual), although frustratingly Amcor do not supply this piping in the box.

The Amcor AD12 12L comes with a washable dust filer to protect the refrigeration components, which is easy to remove from the back of the unit but clearly there isn’t any sort of anti-bacterial filter or ioniser available with this budget-conscious unit.

The AD12 is mounted on big castor wheels, which make wheeling it around the home very easy.

That’s good too, because you won’t be wanting to pick it up. The handle comprises of a single slight hole with a bit of a lip on the top of the back of the unit and considering the machine weighs 9kg, you’ve got to be really careful not to drop it when carrying it around.

It has dimensions of 29cm wide by 26.5cm deep by 47.5cm high, which makes it slightly deeper, but narrower than rivals.

I think the Amcor 12L looks pretty hideous and takes me back to what dehumidifiers used to look like in the 90’s. Endless flat ‘appliance white’ panels only broken up by huge intake grilles are certainly not my cup of tea.

There’s no effort to hide the large bargain-basement castor wheels that the unit is mounted on and I just find the whole machine very unrefined, a further example being the large screws that are holding it together being visible from the outside.

Overall this machine, even on the quieter fan speed is a little louder than competing refrigerant dehumidifiers, probably owing to the less refinement with its lower price tag. You wouldn’t want this model switched on in the room you watch television nor in a bedroom.

The strange thing about this model is that the lack of dehumidifying options mean that it is constantly pushing towards 40%RH, which is impressively dry, but if your house is quite humid then you may find that it doesn’t spend a lot of time when it isn’t dehumidifying (i.e. having reached 40%RH).

Bear in mind that while the unit can extract 12L per day, this is tested under absolute ideal extraction conditions and under UK conditions it will extract much less, roughly around two 1.5L buckets full per day, even with the very dry 40% target.

Finally, remember that this is a refrigerant dehumidifier, so shouldn’t really be used when your room temperatures fall below 15°C as the refrigerant coils can get frosted up and become inefficient at these temperatures, where a desiccant dehumidifier (see our menu at the top of the screen) would be a better choice.

In summary of this review, the dehumidifier doesn’t match up well against truly modern competition such as the EcoAir DC12, but where things get interesting is on price – at this shop we found the Amcor 12L at such a cheap price that we’d be tempted to ditch the mod cons in favour of a little extra in the bank!