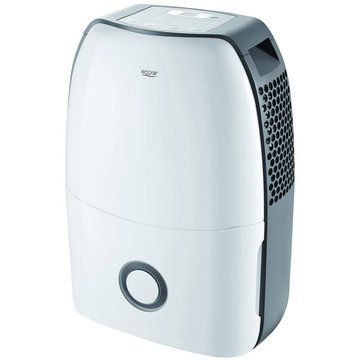 The EcoAir DC12 Compact Portable Dehumidifier is a new addition to EcoAirs’s refrigerant dehumidifier range. We think that this model’s bigger brother, the DC202 is the best domestic dehumidifier ever produced, however it has a price tag to match, so we’re hoping the DC12 can harness this power and quality in a more affordable package.

The EcoAir DC12 is the manufacturer’s ‘budget’ refrigerant dehumidifier, so we weren’t expecting the unit to be feature-packed. However, we were pleasantly surprised. 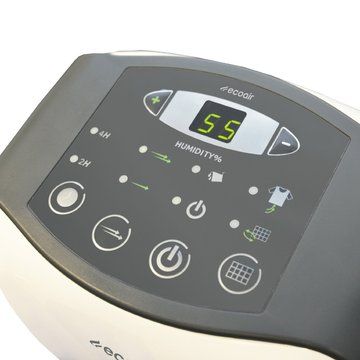 Moving from left to right across the rest of the control panel, the first button is the timer button, which sets the timer for your choice of either two or four hours. This is a useful function, mainly for energy saving, particularly when combined with the ‘laundry’ mode we’ll discuss later in this review. Some other dehumidifiers have a greater range of settable timers, but four hours would be more than enough to dry a heavy laundry load, assuming that’s what you’ll use the timer for, which would make further timer settings largely redundant.

The next button is for the fan speeds, of which the DC12 has two. Two fan speeds if the maximum you’ll see on the current crop of domestic dehumidifiers and is usually reserved for the higher end models, so it’s great to have the option on this one. The benefit of two fans speeds is that you can have the quietness and economy when you want it (which will probably be the majority of the time), but you can also have the power when you need it, such as when drying laundry, after a long shower or when tackling a particularly stubborn damp problem.

The fourth button along selects the laundry mode, which when selected runs the unit on continuous, maximum dehumidifying power. Obviously this drys laundry faster, but it can also be used to give a particularly damp room a blast, although I wouldn’t recommend using this mode continuously for longer than a few days. The timer function can by deployed with this setting to limit how long the unit is running for. Below the laundry setting light there’s a light that comes on to remind you to clean the air filter. This automatic prompt is not often seen on dehumidifiers and useful as it is easy to forget to clean it. 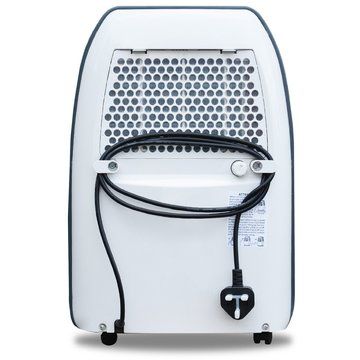 The air filter is on the back of the unit covering the air intake and limits the amount of dust that can enter the machine, where it would reduce its efficiency. Like all dehumidifiers you should look to clean this once per week with a vacuum cleaner to keep it running efficiently. It’s a shame that this is just a simple air filter, not an anti-bacterial filter and also a shame that there’s not an ioniser, but to be fair to EcoAir, no other dehumidifier in this price bracket has these features either, so this is seemingly a forgivable omission to keep the price low.

If you have a drain close to where you’d like to use the DC12, there’s a tap for the auto-drain function on the reverse of the machine (see in between wire tidy clips), which takes a 14mm hose, which EcoAir have kindly included in the box. 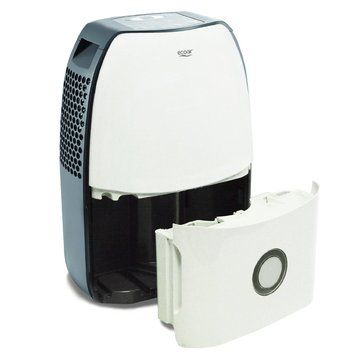 If you’re not able to use the auto-drain function then of course you’ll be interested to hear about the water collection bucket. Most importantly, it’s enormous for a unit of this power. Typically we’d see a 2 litre bucket on a unit of this size, whereas the DC12 comes with a 3.5L bucket, which effectively halves the number of times you’ll need to empty it. A further plus point is that there’s a large viewing into the bucket on the front of the unit, so you’re able to gauge the water level at any one time. The ‘bucket’ itself is more of a container, with a hole for the water to enter and exit, which greatly minimises the risk of spillages while you’re walking with it to the nearest drain.

With the burden of having to carry a large compressor and metal coils, portability is rarely a strong area for refrigerant dehumidifiers and it’s no different for the DC12.

The machine weighs in at 11.5kg out of the box, which is average for a modern unit of this size.

The DC12 has dimensions of 22.5cm deep by 49.6cm high by 35cm wide, which again makes the unit about average in size for a refrigerant dehumidifier, if anything a bit less deep.

What we did like were the castor wheels that the unit is discreetly mounted on, which make wheeling the machine from place to place relatively easy, particularly if not on carpet.

The castor wheels somewhat make up for the lack of a proper handle. What you have instead are basically slots for your hands on either side of the unit, near to the top, which leaves you hunched like a gorilla while carrying it around.

Obviously design is a personal thing, however I really like the look of the DC12, with the matte, curved, off-white and grey colours a departure from the usual flat, ‘appliance-white’ panels typically seen.

Beyond aesthetics, I’ve already raved about the top-mounted, easy to use control panel and the front mounted collection bucket. The lack of a proper handle would be the only gripe here.

Thankfully the DC12 comes with two fan speeds, because on the faster of the two settings it is a little noisy, but as this will not be the speed in use for the majority of the time, this isn’t too much of a concern.

On the lower of the two fan speeds, EcoAir quote the machine to produce around 42dB, which is quiet and actually a little quieter than more expensive refrigerant dehumidifiers. To put this into perspective, if you were lying in bed with the machine behind the bedroom door, you wouldn’t hear it. Or if it is sited in the room that you watch television, you could only notice it during quieter moments.

The EcoAir DC12 gets the ’12’ from the fact that it can extract 12 litres per day. However be careful with this figure, as it’s measured at 30°C and 80% relative humidity, tropical conditions that are extremely rare in the UK. The extraction rate greatly reduces in UK conditions and unless you’ve suffered flooding, the maximum I’d expect the DC12 to produce per day is one bucket full, and usually less than this.

The machine is clearly a well-engineered dehumidifier, and I wouldn’t have any qualms about using this to control the climate in a three bed house.

In brief, I think the EcoAir DC12 is a fantastic dehumidifier. It’s powerful, easy to use, well designed and with being one of the cheapest dehumidifiers currently available makes it a great overall package. It has been out of stock for the majority of November and December 2014, but came back in on the 11th December at this shop, so get it while you can!