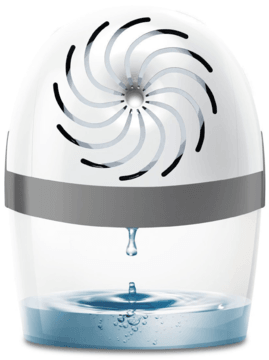 In this review we’ll investigate how it works and how effective it is at controlling humidity. To maintain a coherent structure we’ll review it against our standard dehumidifier criteria. However, remember that while the Aero 360 will stop the worst effects of humidity in a single, well-sealed room, it will not control the humidity of a house, which if you’re looking at this product may be what you actually need. Check out our best buy (some are surprisingly cheap) dehumidifiers here. 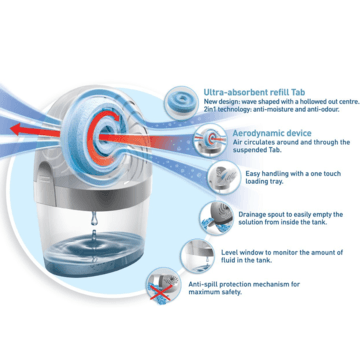 With regard to the features of the Aero 360, don’t be fooled by the American-style sales blurb. Our favourite quote from the sales pitch is when they call the Aero 360 an “aerodynamic device”, which implies that the device moves the air in an active way. In reality the device just sits there and the air swirls around it like it’s swirling around your hands right now. The truth is, moisture in the air diffuses very rapidly so any imbalance in the moisture concentrations are quickly evened out, therefore it doesn’t need to actively move the air.

The second bugbear of ours is the way that the moisture absorber tablet is talked up. The “40% improvement” is because the ridges in the tablet increases the surface area in contact with the air.

Beyond the ridges, the tablet features a distinct blue side and a white side, with one being the salt-based material that extracts the water from the air and the other being the odour eliminator. The odour eliminator is essentially the same material as can be found in those Neutradol blocks that some people keep in their homes. 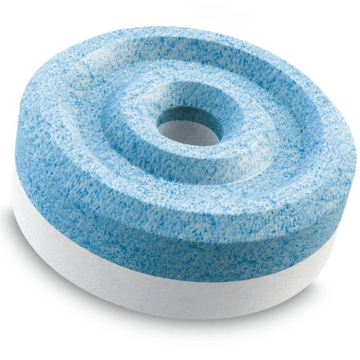 To insert the tablet, first you find the notch in the top of the plastic cage and fold one of the sides down. Then you’ll notice a plastic rod sticking up, which you put through the hole in the middle of the tablet with blue side down. Fold the cage back up and you’re done with the set up.

One of the biggest drawbacks to the Aero 360 is that the moisture absorbing tablets have to be replaced on a regular basis as they become dissolved by the water that they collect on their surface. UniBond claim that these will require replacing every 3 months, however real-world usage proves that this is more likely to be every month. As opposed to these salt-based moisture traps, silica-type moisture absorbers can be ‘regenerated’ in the microwave, eliminating the need for continued purchases. Having said this, the Aero 360 is much more effective at removing moisture than silica-type absorbers.

The water drips down from the absorbing material into the large transparent base, which can hold nearly 2 litres before it needs emptying. Thankfully, emptying the Aero 360 is made very simple through the spout on the side.

The unit was surprisingly large when we saw it in the flesh for the first time. We’re not saying that this is a bad thing however, as more surface area means more humidity can be removed, but it’s just something to note. It has dimensions of 24.2cm high by 11.9cm deep by 18.9cm wide, so it could slightly dominate a windowsill, if that’s where you’re planning to put it.

As it is likely to be out on show, it’s a good job that it looks quite modern and looks particularly good when compared to the white trays of calcium chloride salt crystals that this competes against.

As well as being aesthetically pleasing, for what is a low price it seems thoughtfully designed, with the very handy spout making it very easy to pour water away. Also, inserting the water absorbing tablets is very quick and tidy.

It’s a simple task to move the unit around when it hasn’t got water in as it weighs just under a kilogram. However, as it lacks any sort of handle it can prove a little tricky to move around when the water tank is full. The weight of the water can add a couple of kilograms, so I made sure to only hold the transparent bucket when picking the unit up.

OK, so compared to any sort of plug-in dehumidifier there is absolutely no contest on what will absorb the most water. You’d likely fill a 2 litre water collection bucket on one of our top pick dehumidifiers once per day, whereas you may only fill the Aero 360 once per week. To make a noticeable difference to the humidity of a room you should keep the room tightly sealed by keeping doors shut, closing windows and blocking drafts. This should limit diffusion of moisture vapour from the more damp areas of the home into the room you wish to dry.

Despite these slightly negative comments, we are actually very impressed with the amount of water the Aero 360 extracts when compared to other moisture absorbing devices on the market. Provided the room it’s located in is somewhat sealed, it should definitely help to reduce the condensation and mould in that particular room.

Considering its extraction performance compared to the competition, the UniBond Areo 360° Pure represents very good value for money. This was even before we saw the dirt-cheap prices they are being flogged at in this shop, so it’s worth checking that before going further.